skip to main | skip to sidebar

It's time again for Quirky Cupcake's: Cupcake Hero. This month the challenge is MINT and as her guest judge she invited Natalie of Bake and Destroy to put her palate to the test. At first I got really excited. Laurie's post was so full of sugary goodness. I started brainstorming right away. Then I thought of the perfect cupcake. Or at least I thought it was. I was making some High Hat Cupcakes for a friend in what I called the Trailer Trash Cupcake War (it's a long story and I won, at least I think I did) and I think High Hats are probably the best cupcake ever and why not add mint! Perfect.

I made up a batch of HH's and pulled a few aside for the Mint High Hat. I decided to flavor and color the marshmallow filling but mint is strong and so maybe just half should be flavored and colored. I took a cup of the marshmallow filling and used pink food gel coloring. It started to look like Pepto. Not so nice but maybe it will taste good. I added some peppermint oil. It held together. I tasted it. It tasted like Pepto! Gross. I then decided to finish the experiment because maybe adding the cake and chocolate coating would affect the overall taste. Nope. I give you the Pepto Cupcake. Yum. 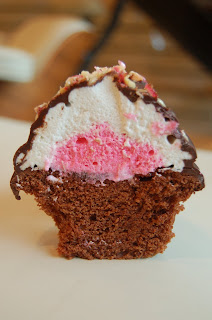 It looks pretty, but don't be fooled!

But this post is titled "The Girl Scout Cupcake." I was so unsatisfied that I tried again. This time I threw out the idea of using the High Hat. The High Hat is perfect the way it is and didn't like being fooled around with.

So after thinking about what mint things I enjoy I thought of the Thin Mint. That small little cookie that's so addictive. I researched different recipes and threw together, The Girl Scout Cupcake. 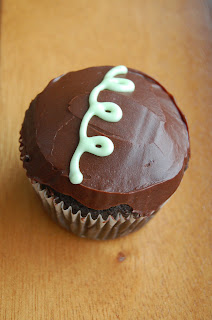 The filling is so creamy and smooth and just the right amount of peppermint flavor. It's clean and not too overpowering. The cake is a good dark chocolate. Simple and trustworthy. And the chocolate ganache frosting, classic. I used some of the peppermint filling, colored it green and piped on the top. 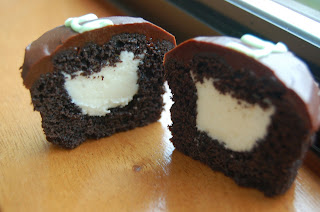 I was so surprised by how delicious this tasted. After eating one I thought about how good it was all day. My mom loved them and even my babysitter, who never eats sweets, ate an entire cupcake. I call that a success.

This has got to be the best cupcake I have ever seen!

Thanks Lannae! What a compliment. I'm blushing.

I can't buy those cookies anymore because I have absolutely NO willpower when it comes to resisting them. Those cupcakes sound amazing!

How To Eat A Cupcake said...

It looks so perfect! I'm bookmarking this!

These look really cute! And good! I might just have to try making a batch myself :).

I found you on Key Ingredient...then realized you were David's wife :D! Nice to meet you!

I was just wondering if it was ok to post your "Halibut with Carrots and Leeks" recipe on the Key Ingredient Blog? I personally love halibut, and leeks are in season, so I thought it'd be the perfect dish to feature! Drop me a line when you can!

I just found these off of the cupcake hero website. They are amazing. Do you have a recipe for the peppermint cream filling you'd be willing to share? I've been looking for something like this everywhere!

For some reason the widigets I used for the recipes have dissapeared off my blog. UGH.

and you should find the entire recipe. I'm totally making them for Christmas this year! Hope you like them!

Oh thank you Carla! I'm SO excited to make these...I'm absolutely obsessed with chocolate and mint and your recipe looks fantastic. I appreciate it!

I am so glad I found this blog, I've been looking for a fun recipe to take to a girl scout function and think this is it. 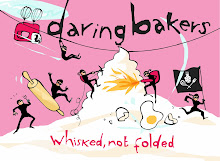